In this fascinating excerpt, Dr. Oschman provides a historical and biological perspective on the development of the Living Matrix Concept.

He describes a continuous network from the cytoskeleton within each cell, to the extracellular fluid matrix, to the myofascia itself as a body-wide system of communication and support that is vital to all functions.

This system has a remarkable property for the storage, transmission and processing of information that governs homeostasis and determines our level of health and well-being.

Biomedical research has demonstrated, for example, that the heart generates electrical currents that flow throughout the body.

Science knows about one pathway for this energy flow, consisting of the blood and other conductive body fluids. As the most powerful electrical generator in the body, the electrical currents that the heart produces within the tissues create biomagnetic fields detectable in the space around the body.  Modern science, however, has yet to determine the details of other conductive pathways through the body or by the meridian and flow systems.

A clue about the conductive pathways within the body was provided by the intersection of the work of Albert Szent-Györgyi and his colleagues with a picture that was emerging at the same time in the field of cell biology. SzentGyörgyi had recognized that protein molecules and the structures made of proteins can be electronic semiconductors. This observation meant that the protein frameworks found in cells and tissues are probably electronic ‘circuits’ that can silently and rapidly move energy and information throughout the organism. He suggested that chronic diseases arise when these circuits are not working properly. His picture of the cause of cancer was that of a lack of flow of electrons, a concept comparable to ‘stagnant qi’ in Oriental medicine.

At the time when this energetic picture was coming into focus, two key discoveries in cell biology led to the profound idea that the body contains a continuous molecular fabric that reaches into every nook and cranny of the organism.

The first discovery was by Mark Bretscher at Cambridge University in England. He found that there are proteins extending across cell surfaces, which connect the cell interior with its surroundings. Eventually it was recognized that important molecules called integrins connect the cytoskeleton of every cell with that of neighbouring cells and with the surrounding extracellular connective tissue matrix that pervades the body. 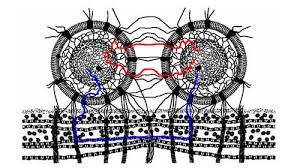 Secondly, Berezney and colleagues from Johns Hopkins University in Baltimore, Maryland found that there are also connections across the nuclear envelope, joining the cytoskeletal matrix with the nuclear matrix .

Taken together, these observations mean there is a continuous physical system or matrix that actually extends throughout the body and that reaches into every part, even into the nucleus and the DNA. Additional evidence from the Johns Hopkins laboratory revealed that the components of the living matrix network are capable of vibrating in a dynamic manner with measurable complex harmonics . The language of this system is spoken in electrical oscillations and the information is encoded as frequencies. It is intriguing to consider this continuous system as the substrate for the energetic electronic regulatory system for which Szent-Györgyi was searching during the last part of his life. This body-wide continuum has been named the ‘living matrix’ .

Stephen Birch and Kiiko Matsumoto, when writing their book Hara Diagnosis: Reflections on the Sea, discovered that the earliest Chinese medical classics, the Su Wen, Ling Shu and Nan Jing, all made reference to the location of the meridians or channels in ‘fatty and greasy’ tissue, the ‘body lining’, or the ‘space between the organs, bones and flesh’. This image of shiny mate - rial was replicated in leading texts down through the ages, and had to be a reference to what we now know as the connective tissue and fascial systems that extend throughout the body, and are visible as the shiny coverings of muscles, tendons and ligaments. Moreover, the shiny or reflective aspect of and special contribution this material indicates the presence of free electrons – as in a metal. The living matrix concept shows how this continuous system extends across the surfaces of cells, through the cytoskeletons and into the nuclear matrices of every cell in the body.

Matsumoto and Birch have considered the possibility that the living matrix system and Szent-Györgyi’s electronic biology could provide a basis for the Oriental medical perspective of a metasystem that links and influences every aspect of human physiology. The concept of a fascial, connective tissue metasystem has been reiterated by Langevin. Finando and Finando have recently written a thoughtful article suggesting that the properties of the fascia actually account for many, if not all, aspects of the mechanism of action of acupuncture therapy.

Their conclusions are based in part on the following:

The fascia, with its connections to the interior of cells and cell nuclei, and with its electronic conduction properties, could be a whole body regulatory system that works silently in the background – that is, below our conscious awareness, integrating and coordinating the functioning of all of the parts of the body. Perhaps this entity is the energetic system, the dysregulation of which gives rise to so many chronic diseases.

James Oschman, PhD has a doctorate in biological sciences and is regarded as one of the world’s preeminent researchers and authors in the field of Energy Medicine. His Living Matrix Concept is based on a new understanding of the nature of cells and tissues in the human body. He is author of Energy Medicine: The Scientific Basis, and Energy Medicine in Therapeutics and Human Performance. Jim lives in New Hampshire, and lectures around the world. His website is www.energyresearch.us.